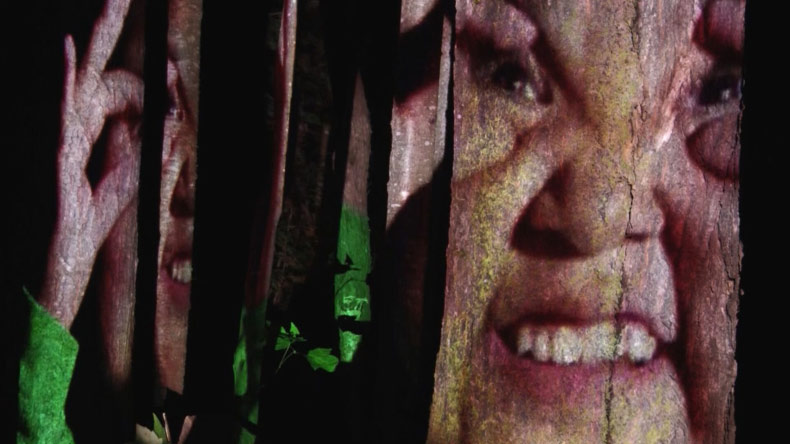 Our relationship to land – in all its incarnations – comes into focus in this program of shorts by Indigenous filmmakers from Canada. From fear to strength and displacement to pride, these artists take us on a journey that requires a firm footing and a strong stance. Curated by imagineNATIVE it features works from emerging to more senior Indigenous artists. Generously supported by Urban Shaman Gallery.
Tshiuentin, Directed by Caroline Monnet , 2016, Canada, 11 mins
Carving its way through the beautiful landscape of western Labrador and northeastern Quebec is the Tshiuetin rail line. The only railway in Canada owned by Indigenous people, the Tshiuetin is a lifeline for the people who call this land home and a source of pride for all who ride this historic line.

The Unforgotten featuring Tanya Tagaq, 2018, Canada 3:40 min
This music piece created for Iskwé’s song was created by students from the Digital Lodge project with support from Rhayne Vermette and Amanda Kindzierski. The Digital Lodge is a multi-year project to train a group of youth from Thompson, Manitoba in the art of digital storytelling and the practice of digital responsibility and citizenship.

Cree Code Talker, Directed by Alexandra Lazarowich, 2016, Canada, 13 min During the Second World War, the Allied Forces utilized Indigenous language speakers to transmit coded messages that could not be broken. The contributions of Charles “Checker” Tomkins are revealed in this insightful look into how the Cree language was used as a vital secret weapon in combat.

God’s Acre, Directed by Kelton Stepanowich, 2016, Canada, 15 mins
Lorne Cardinal stars in this unsettling, powerful short of a man determined to protect his land at all cost. As the water slowly rises in a frighteningly familiar future, the man must choose to abandon all that he knows or give in to the rising tide.

7 Minutes, Directed by Tasha Hubbard, 2016, Canada, 7 min
Marie’s walk from her university library to her home is an even seven minutes. It’s a walk she has made many times but one night she is followed by a man who tries to get her into his van. Relieved to have escape, Marie’s story speaks to the threat Indigenous women confront on a daily basis.

Grow Up, Directed by Michael Captain, 2018, Canada, 2:08 min
This video is seen how you see it. The things you hear is how you hear it. I’m not going to tell you how to feel when you watch my video. You see what you want to see.

Cache-cache, Directed by Louisa Papatie , 2016, Canada, 3 mins.
Set amongst a dreamlike forest, a grandmother and her grandchildren play a whimsical game of hide-and-seek. The joyfulness in her voice and the giggles of the children are a welcome invitation to a time when all we needed was a place to hide.

The Grandfather Drum, Directed by Michelle Derosier , 2016, Canada, 12 mins
Revered for its healing powers by the Anishinabek of the upper Berens River, Naamowin’s drum can restore life. This stunning animation reveals the true story of how a drum designed to heal became trapped by colonial forces designed to disrupt the delicate balance between the world above and the world below.

Urban thanks our friends at ImagineNative and WFG for working together with Urban Shaman Gallery to bring these amazing works to Winnipeg! We also acknowledge the support, throughout the year, of our friends, volunteers, community and all our relations, NCI FM, the Winnipeg Arts Council, the Manitoba Arts Council, the Canada Council for the Arts.
~Miigwetch/ Hai Hai/ Ekosi