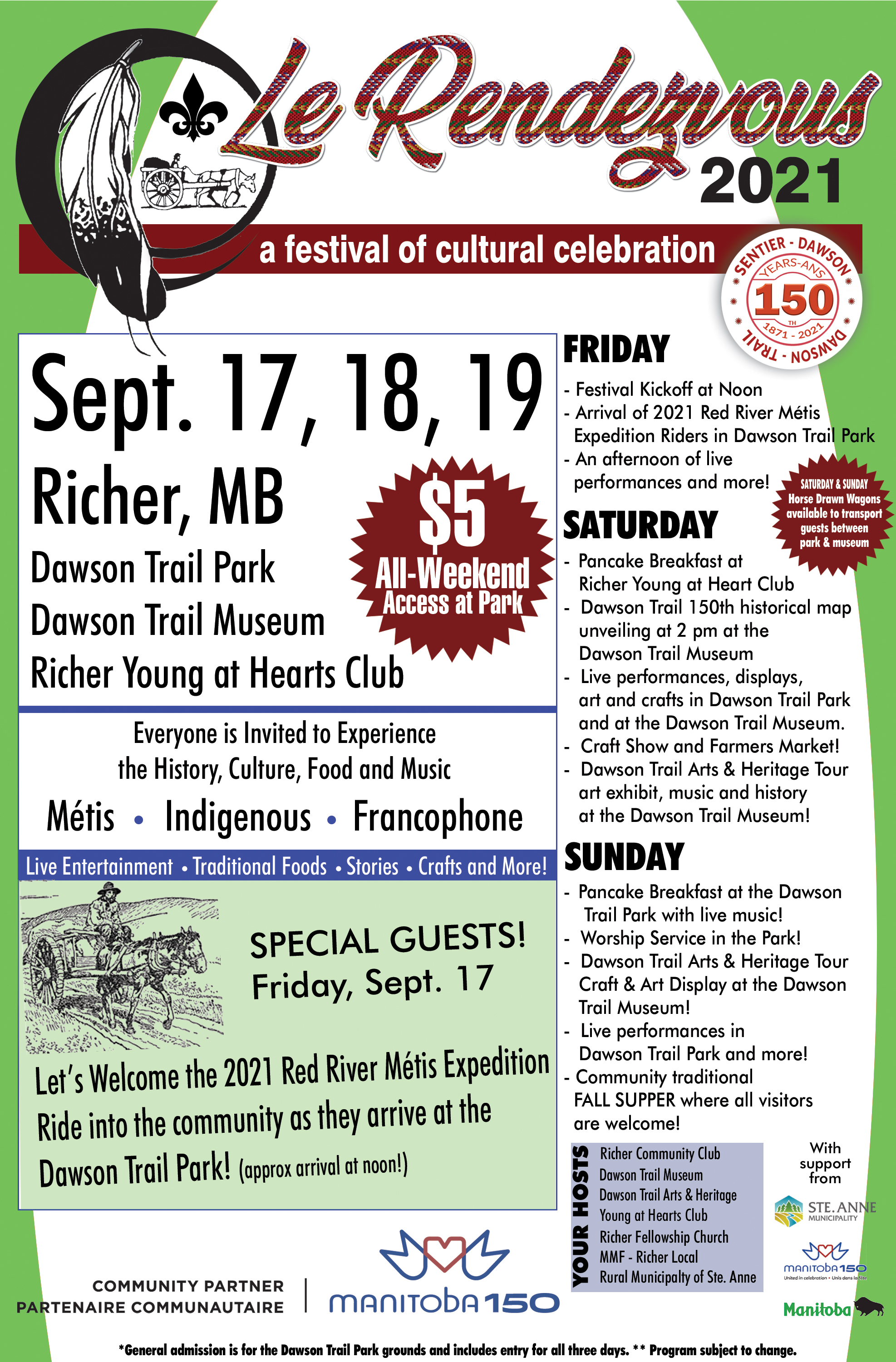 Celebration to Immerse Visitors in Métis,
Francophone and Indigenous Spirit

With a celebration showcasing Métis, Francophone and Indigenous cultures, Richer, Manitoba is hosting a new festival on September 17-19, 2021.

Le Rendezvous will be a celebration of the three cultures who have historically worked and lived together in the area. The cultural diversity and historical respect for each other has created a successful and thriving region. The weekend will focus on the pride of our core founders of the province in a community where the majority of the population is still made up of the descendants of these settlers and First Nations residents.

With funding from MB150, the local municipal government and various other sponsors, the weekend celebration will treat the public to the sights, sounds and tastes of the cultures.

“We started planning this event in 2020 then the pandemic came around and we have had to postpone,” said Dan Guetre, one of the organizers of the event. “We never gave up the idea though and now we are ready to present this new community festival to the public.”

“Not only are we celebrating MB150 with this unique experience, but we are also celebrating the 150th anniversary of the Dawson Trail. It was referred to as ‘Canada’s first Great highway to the West’ and used by settlers starting in 1871,” explained Guetre. “The event will actually kick off with the arrival of Red River Carts, wagons and riders on horseback who will be recreating what new arrivals experienced when travelling along a route that still shows signs of the corduroy base of logs laid down to create the foundation of the trail.”

Historically, it was a route that would forever change the fate of our province and country.

Le Rendezvous will feature multiple venues in Richer hosting music, art, crafts and food. The committee is also arranging for teams of horse and wagons to escort visitors between venues such as the Dawson Trail Park and the Dawson Trail Museum.

“We are booking entertainment that will allow guests to experience something of all the cultures that have settled in the area. We are focusing on both historical and contemporary shows,” explained Guetre. “There is going to be a huge variety of acts catering to everyone’s tastes.”

The Dawson Trail Museum will be opening its doors and grounds to displays, a craft and farmers market, music and more. The Dawson Trail Park will feature live music on multiple stages, story tellers, a historical interpretive display (including two giant teepees), interactive displays, and lots of food.

The Dawson Trail Arts and Heritage committee will be featuring a special group art exhibit themed “The Journey”, with artist talks and curatorial presentations planned throughout the weekend at the museum grounds.

The weekend will also feature an expanded traditional Fall Supper bringing both the community and guests together.

“We have all experienced a tough go of it over the past couple of years and creating Le Rendezvous is our community’s way to create a fun, family oriented weekend open to anyone that wants a semblance of ‘normal’ back in their lives,” said Guetre. “We are going to keep it inexpensive for all guests and focus on treating Manitobans to our way of life with a historical and contemporary mix.”