Up Close: Ancient buffalo hunting on the Great Plains 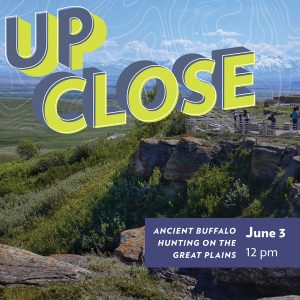 The landscapes have a story to tell. Hear the stories from an indigenous lens. Learn how the Blackfoot language and stories connects to the Great Plains natural world. In order to survive in these times, the ancient Plains people were dependent on understanding the environment and the behavior of the Buffalo. One of the techniques derived from this knowledge was the Buffalo Jumps. An ancient hunting method herding up the animals, tricking and luring them to the edge of a cliff. For thousands of years, the ancient plains people survived by driving buffalo over steep cliffs including Head-Smashed-In Buffalo Jump, one of the oldest, largest, most used and best preserved Buffalo Jumps on the North Western Plains. Learn how the animals were processed and how the Buffalo contributed to the way of life of the plains people.

Join Conrad Little Leaf, Senior Interpreter at Head-Smashed-In Buffalo Jump as he takes you into the ancient past, sharing knowledge and stories from his ancestors, the Blackfoot plains people.

Speaker bio:
Conrad is a member of the Piikani Nation, one of the four nations that make up the Blackfoot Confederacy. Conrad was raised in an environment that provided him first hand knowledge of his ancestors, the Piikani, Blackfoot. Conrad’s journey has been focused on education as he is a former teacher with the Calgary Board of Education and Director of Education in his home community of Piikani. Conrad is currently Senior Blackfoot Interpreter at Head-Smashed-In Buffalo Jump.