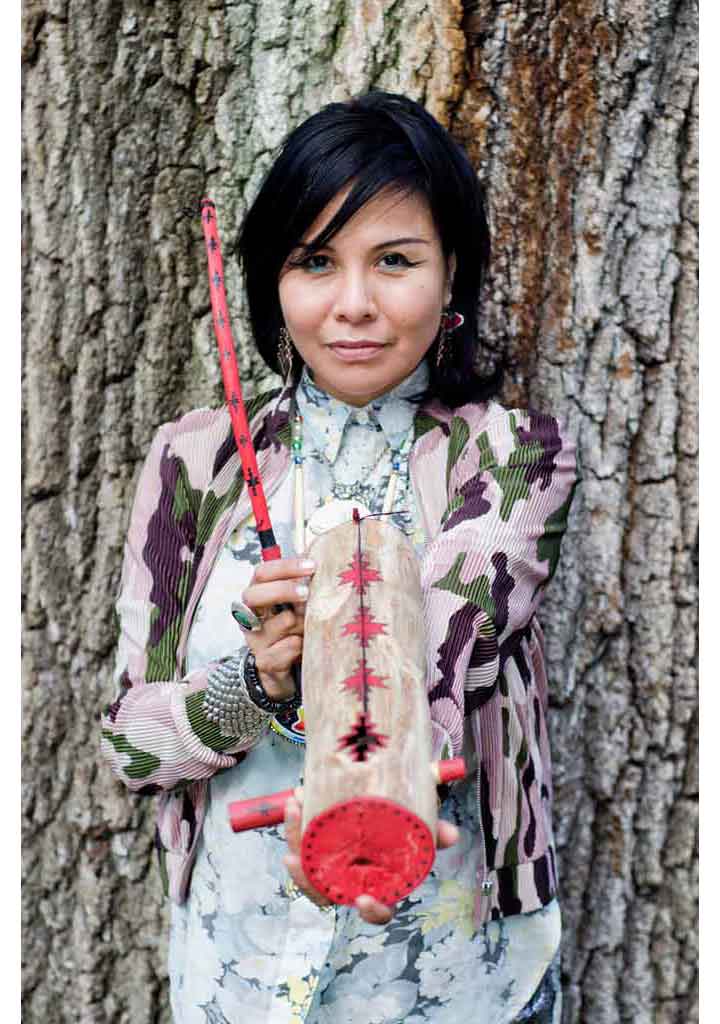 Performance Description
“…Ortman’s music is known for compositions that alternate lyrical intimacy with layered improvisation, often experimenting with four-track tapes and remixing her own audio catalogue in an evolving dialogue with herself. “I try and create music for your most solo moments,” she says…Her practice does have a strong connection to visual art, going back to before she moved to New York in 1997. “I used to try to create painting and installation work about being isolated, of being singular,” she says. “Then I started making my own music for the installations, to fill them up. Then, at last, I decided that the sound was what was really moving me.” She still describes what she does as “sculpting sound”…”- Artnews, Ben Davis, May 23, 2019.

Biography: A soloist and vibrant collaborator, Laura Ortman (White Mountain Apache) works across recorded albums, live performances, and filmic and artistic soundtracks, and has collaborated with artists such as Tony Conrad, Jock Soto, Raven Chacon, Nanobah Becker, Okkyung Lee, Martin Bisi, Caroline Monnet, Michelle Latimer, Martha Colburn, and Loren Connors. An inquisitive and exquisite violinist, Ortman is versed in Apache violin, piano, electric guitar, keyboards, and pedal steel guitar, often sings through a megaphone, and is a producer of capacious field recordings. She has performed at The Whitney Museum of American Art and The Museum of Modern Art in New York, the Musée d’Art Contemporain de Montréal, and the Centre Pompidou, Paris, among countless established and DIY venues in the US, Canada, and Europe. In 2008 Ortman founded the Coast Orchestra, an all-Native American orchestral ensemble that performed a live soundtrack to Edward Curtis’s film In the Land of the Head Hunters (1914), the first silent feature film to star an all-Native American cast. Ortman is the recipient of the 2017 Jerome Foundation Fellowship, the 2016 Art Matters Grant, the 2016 Native Arts and Culture Foundation Fellowship, the 2015 IAIA’s Museum of Contemporary Native Arts Social Engagement Residency and the 2014-15 Rauschenberg Residency. She is also a participating artist in the 2019 Whitney Biennial. Ortman lives in Brooklyn, New York.

Special thanks to Amber Dawn Bear Robe (Urban staff alumni and friend) for helping with this event and Vital Spaces.

Urban Shaman: Contemporary Aboriginal Art Gallery acknowledges the support, throughout the year, of our friends, volunteers, community and all our relations, NCI FM, the Winnipeg Arts Council, the Manitoba Arts Council, the Canada Council for the Arts. ~Miigwetch/ Hai Hai/ Ekosi / Merci/ Thank you