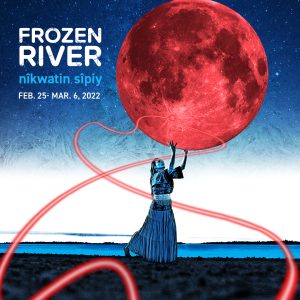 In nîkwatin sîpiy, Grandmother Moon tells the story of two eleven-year-olds, born under the same blood moon, but in different parts of the world. This new play follows their stories as they meet in a forest, and that of their descendants who meet in the present day in what is known as Manitoba. A broken promise from the past can be righted when there is finally an openness to learn from those who have protected and honoured the waterways for centuries.
Mask & Vaccine Policy

All patrons 12 years and older must be vaccinated to attend this event. Those under 12 must be accompanied by a fully-immunized person with whom they reside or a relative who is fully immunized. Manitoba or Canada’s Vaccine Passport will be used for confirmation so please bring either your physical immunization card or the digital QR code, as well as a piece of government-issued photo identification. Student or Manitoba Health cards will suffice for those under 18. Patrons are asked to wear their masks throughout the entirety of the performance. Despite the fact that provincial regulations have changed, we want to honour the regulations that were in place at the time when patrons purchased their tickets to Frozen River.