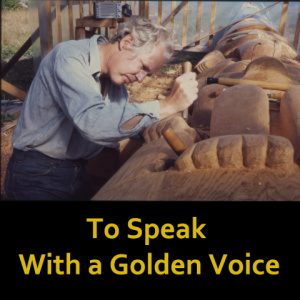 Due to popular demand, the Bill Reid Gallery of Northwest Coast Art announces the extension of its landmark exhibition To Speak With a Golden Voice – in celebration of the centennial birthday of Bill Reid (1920–1998) and his extraordinary life and legacy. Originally set to close in April 2021, the exhibition will be extended until September 6, 2021 and will include the addition of two new monumental artworks and the unveiling of an anticipated new book to commemorate the gallery’s namesake. Guest curated by Gwaai Edenshaw — considered to be Reid’s last apprentice — To Speak with a Golden Voice includes rarely seen treasures by Reid and works from artists such as Robert Davidson and Beau Dick, alongside new works created for the exhibition by contemporary artist Cori Savard (Haida) and singer-songwriter Kinnie Starr (Mohawk/Dutch/German//Irish). Through a deep exploration of his voice, process, lineage, and heritage, the special anniversary exhibition traces the iconic Haida artist’s lasting influence on Indigenous art and culture. Further information: billreidgallery.ca