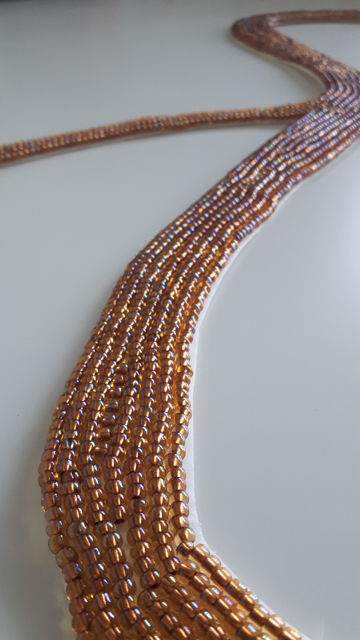 Opening Reception on Friday, February 7, 2020
(Doors open to the public at 5pm for First Fridays, official reception from 8 to 11pm)

In the Main and Marvin Francis Media Galleries

Endurance…..Patience is programmed in conjunction with the national Beading Symposium – Ziigimine-shin, taking place from February 6-9, 2020 in Winnipeg. Basing Urban Shaman’s group exhibition on the title of Francesca Hebert-Spence’s group exhibition at the Manitoba Craft Council, May the Land Remember You as You Walk Upon Its Surface, four Indigenous artists were chosen as part of Urban Shaman’s group exhibition and each individual explores conceptual politics in relation to the land. In this show, Carrie Allison’s work, Red River Beading (Sîpîy), is the most illustrative example of an enduring desire to produce a beaded project. In an effort to show her reverence for the land, Allison has precisely rendered the pathways of the Red and Assiniboine rivers as they flow through the cityscape of Winnipeg. In addition to this project, she has also brought a video animation titled, To Honour, which is a visual documentation of the beading process as a meditative homage to plant life.

Ruth Cuthand’s Boil Water Advisory is a smaller installation of a much larger series of glass vessels that show various drinking containers filled with water and within each container is a beaded piece portraying a type of harmful bacteria. Historically upon colonization, beads were used as a bartering currency with Indigenous peoples and through that bartering process, new sicknesses and diseases were introduced. Although the work is aesthetically beautiful it also speaks to the deadly, and unconscionable, fact that there are approximately eighty First Nations communities who are currently under long-term water advisories in Canada.

Catherine Blackburn’s artwork, Aboriginal Classics, utilizes the delicate material of tea bags filled with Indigenous plant materials picked from various locations around Canada. These natural ingredients are not normally found in everyday usage and because of urbanization are becoming more challenging to collect. In her other series titled, Our Mother(s) Tongue, she has produced black pillows printed with open mouths and tongues pierced by needles to represent historical accounts of Indigenous children who were physically and painfully reprimanded when they spoke their own language in residential schools. However, there is also the positive side to this work by the use of the needles in the patterning of Cree syllabics, which speaks to the resurgence of Indigenous languages being used more commonly in artworks today. This regeneration is occurring for many reasons, however there exists Indigenous theories of how such languages are built from the land, or more importantly, some communities believe Indigenous languages are what the land actually speaks.

Nadia Myre’s four framed pieces are from an older series that she completed in 2002. This incredible project titled, Indian Act, brought groups of people together to bead fifty-six pages of the Canadian Government’s Indian Act document, a document that was first passed in 1876 and is still a law that is still in use today to govern all aspects of Indigenous peoples lives across Canada. All of the 56 pages are in various stages of completion and are found in many public and private collections, we thank private collector, John Cook for loaning us his four pieces for this exhibition.

Biographies:
Carrie Allison is an Indigenous mixed-ancestor multidisciplinary visual artist born and raised on unceded and unsurrendered Coast Salish Territory (Vancouver, BC), with maternal roots in High Prairie, Alberta. Situated in K’jipuktuk since 2010, Allison’s practice responds to her maternal Cree and Métis ancestry, thinking through intergenerational cultural loss and acts of reclaiming, resilience, resistance, and activism, while also thinking through notions of allyship, kinship and visiting. Allison’s practice is rooted in research and pedagogical discourses. Her work seeks to reclaim, remember, recreate and celebrate her ancestry through visual discussions often utilizing beading, embroidery, handmade paper, watercolour, websites, QR codes, audio, and video. Allison’s practice is time intensive, repetitive, durational, and thoughtful; she uses beading to connect with histories, narratives, relatives, and ancestors. Her Master’s thesis exhibition, titled Sîpîy (river in Cree) explores connecting to rivers and ancestral lands through intense practice of beading. She beaded two ten-metre rivers, the Heart River and the Fraser River, while also organizing a community project beading the Shubenacadie River to promote and support the work of Stop Alton Gas. The Shubenacadie River Beading Project is a community collaborative project that thinks through notions of kinship, solidarity, and inspiring allyship. The individual pieces were auctioned off to raise funds for Stop Alton Gas’ legal fees.

Catherine Blackburn was born in Patuanak Saskatchewan, of Dene and European ancestry and is a member of the English River First Nation. She is a multidisciplinary artist and jeweller, whose common themes address Canada’s colonial past that are often prompted by personal narratives. Her art merges contemporary concepts with elements of traditional Dene culture that create dialogue between traditional art forms and new interpretations of them. Her work has exhibited in notable national and international exhibitions and fashion runways including; Àbadakone, National Gallery of Canada, Santa Fe Haute Couture Fashion Show, Niigaanikwewag ( 2nd iteration), Art Gallery of Mississauga, and Art Encounters on the Edge, Bonavista Biennale, Newfoundland. She has received numerous grants and awards for her work, including the Saskatchewan RBC Emerging Artist Award, the Melissa Levin Emerging Artist Award, a publication in Vogue online magazine, as well as her inclusion on the 2019 Sobey Art Award longlist.

Ruth Cuthand was born in Prince Albert, Saskatchewan, in 1954, and is of Plains Cree and Scottish ancestry. Her works “talk back” to mainstream media and colonial society, addressing the frictions between cultures, the failures of representation, and the political uses of anger in Canada. Her subjects include “white liberal” attitudes towards Aboriginal women, the Canadian response to the 1990 Oka crisis, Mormon-Native relations in Cardston, Alberta (the artist’s childhood home), and more. As an artist, teacher, and cultural activist, Cuthand has been extremely influential for other artists in Saskatchewan, and contemporary Aboriginal artists across Canada. She graduated from the University of Saskatchewan with both a Bachelor of Fine Arts degree and a Master of Fine Arts degree.

Thank you to Winnipeg Foundation for special funding of this project.

“Endurance…..Patience” is in conjunction with Beading Symposium: Ziigimineshin Winnipeg 2020 and we would like to thank those helping -Manitoba Craft Council, MAWA and the Manitoba Museum.