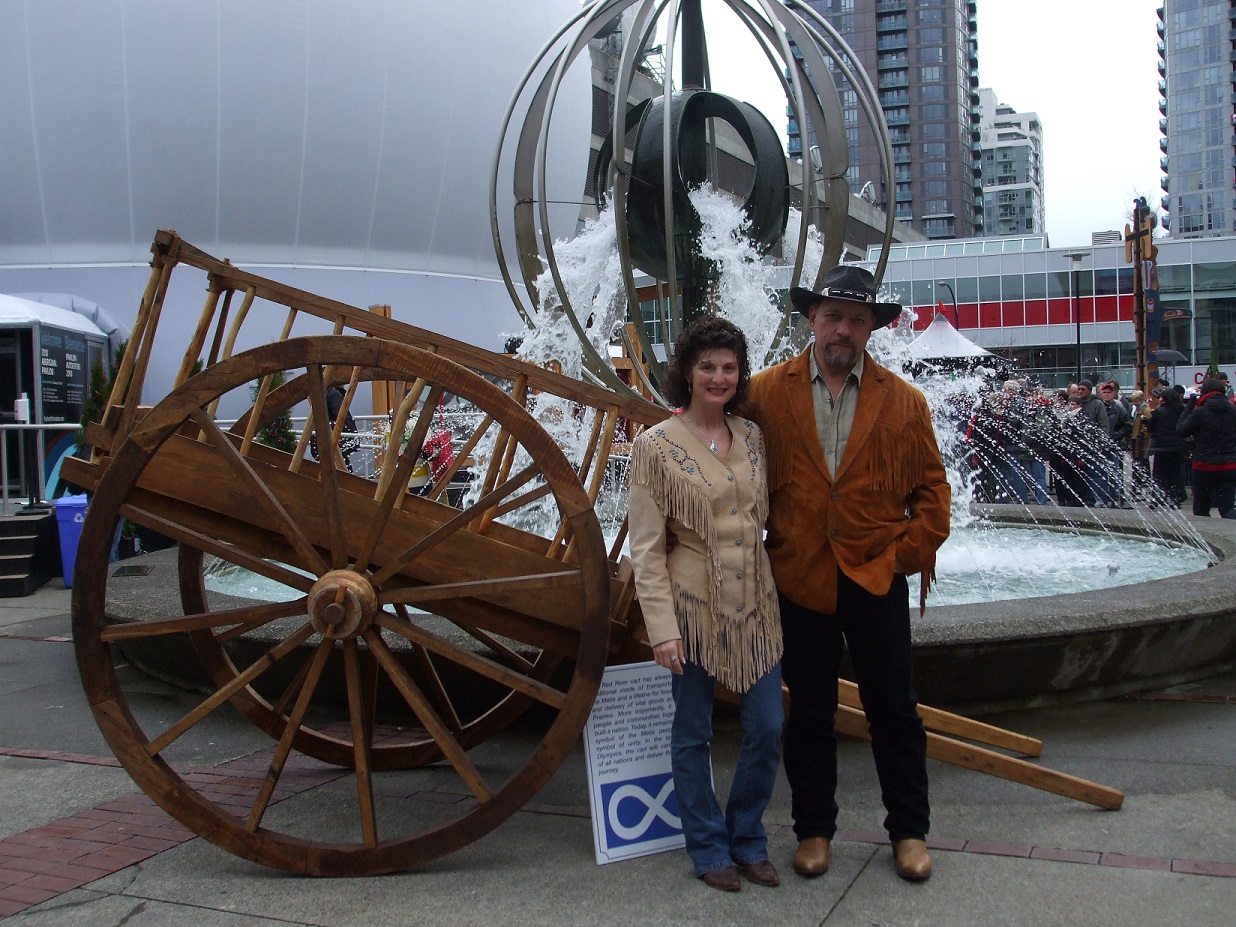 This year marks Manitoba’s 150th birthday celebration. Numerous communities across the province are planning their celebrations during the year, but it will be the 2020 Red River Métis Expedition that is sure to draw the most attention.

It has been mine and Kelly’s vision to insure Métis recognition in the creation of this province, so a journey is in the planning that will start in Kenora and along the Dawson Trail towards Winnipeg. First by dogsled and then by Red River Cart to end up at Manitoba’s birthplace at Upper Fort Garry on May 12, Manitoba’s official birthday. The Dawson Trail was selected for this journey because it was the first road connecting eastern Canada to the Red River Colony. It was also used by Wolseley leading British and Canadian soldiers to suppress the Métis at the Red River. It was called the Wolseley Expedition or otherwise known as The Red River Expedition. Thus the name I have chosen for this journey ” The Red River Métis Expedition”.

As for the history of Louis Riel and the Métis involvement in the creation of this province here are the facts:

PART 1 [DOG SLED JOURNEY FROM KENORA, ON TO WHITEMOUTH RIVER]

After two years of planning Part 1 of the Red River Métis Expedition was set to begin. It would all start on Monday Feb 17 with a pre-kickoff celebration at the Kenora Sportsplex arranged by the Kenora Métis Council. The pre-kickoff celebration ran from noon to 3:00 p.m. with opening ceremonies starting at 12:15 and then followed by live entertainment and Métis dancers. While celebrations where happening indoors there were other activities occurring outdoors as well such as snow shoeing, dog sled rides, apple roasting over open fires and across town in Anicinabe Park Crokacurling. Anicinabe Park was to be the original start off point for the Dog Sled part of the journey, but due to poor ice conditions it was decided to move the Launch Site to MNR Landing. So the next morning on Feb. 18 people and Media sat in their vehicles anxiously awaited Samantha and Marc-Andre Belcourt and their team of dogs to begin the Red River Métis Expedition. Kelly and I had unloaded the Cariole Dog Sled and chatted with few other people willing to brave the extreme wind chill outside their vehicles. A Cariole type dog sled had been chosen for this part of the journey to follow the concept of early Métis Culture. Cariole’s in winter and Red River Carts in summer.

Finally the moment had come! The Belcourt’s of Harness Mushing Adventures and their dog team had arrived. They immediately began harnessing the dogs as the send-off ceremony was in process which included an opening prayer for the expedition’s safety. As the dogs yelped and barked in harness, Tyler Thomas the youth coordinator for the Manitoba Métis Federation sat in the sled as he would be the person to start the journey. In the midst of blowing winds as the dogs jumped and barked in anticipation of running free. They were released of the tether that bound them to the truck and we all stood cheering, watching them bolt and then slowly fade from sight through the blowing snow. Everyone was invited to Anicinabe Park after the Launch to enjoy a hot drink and food indoors to fight off the chill from an extended stay outside. After a spell visiting at Anicinabe everyone went their separate ways

Kelly and I headed west along Trans Canada Hwy to Manitoba Road 308 and headed south across the U.S. border to the first camp spot at North West Angle Inlet. For safety reasons the dogsled was escorted by Joe Laurin and the Northwest Angle Edge Riders on snowmobiles.  We sat at Jerry’s Restaurant looking out the large windows for any sign of them arriving. We started to worry as night fell and there was no sign of headlights that would give us a clue of their arrival. Just to be prepared Kelly and Samantha started heating up frozen meat for the dogs in a large aluminum container over a propane heated element. Finally hours late we could see them approach the restaurant in the driving wind. Kelly helped Samantha feed the dogs while half frozen trekkers thawed out on the stools at a corner of the counter.

The late arrival was due to the dog’s struggling through the constant drifts that often obscured the snowmobile trail they were following. Thanks to the North West Angle Edge Riders we were all able to stay at their workshop for the night. Kelly and I were able to sleep in our camper with heater on high as we had been given permission to plug into an outlet while Samantha and Marc-Andre with the dog team could rest comfortably indoors.

The next morning, day 2, I join Marc-Andre on the sled to follow the original Dawson Trail from the Angle up Harrison Creek into Manitoba where we would meet Henri and Cecil Gobeil and with Mitch Gobeil from the Snowman Snowmobile group. They guided us along the Dawson Trail to the next camp where the Dawson meets the Road 308.

The morning started in a flurry of mistakes along with some bad luck. With  Marc-Andre driving and me in the sled, we missed the entrance of the snowmobile trail heading west and continued along the ice road heading in the wrong direction. With no escort for that morning, the dogs in their excitement took the path of least resistance, that being the ice road. So with a broken foot brake Marc tossed the snow hook in an attempt to stop the dogs.With two extra dogs pulling that day and the momentum/speed of the sleigh; the rope holding the hook snapped and left us brake-less and careening down the ice road further away from our destination. But just as quickly as we got into trouble we managed to get out of it as Marc-Andre somehow shifted his weight on the back end and forced the dogs into the deep snow at the side of the ice road. This gave me the opportunity to jump out of the sleigh and put my full weight on the drag mat at the back while Marc-Andre moved to grab the dog lines up front. Then out of the blue Samantha and Kel were there to help! A short while later with me riding the drag mat we were able to steer the dogs in the right direction and get them on the proper trail heading west along Harrison Creek.

Once we got going, Marc and I headed west along the trail where Ryan (owner of Jerry’s Restaurant at North West Angle), showed up on his snowmobile to guide us into Manitoba where we soon meet our Manitoba escorts. It was a cold windy day but I didn’t feel the cold as much through the adrenaline high I was feeling as for the first time in my life I was on the back of the dog sled travelling along the old Dawson Trail with Marc-Andre taking a break sitting inside.

Soon we found ourselves travelling through Manitoba at a northwest direction guided by our Manitoba escorts. The Trail was a thing of beauty as we followed a narrow trail sided by heavy Cedar branches making things seem surreal. As we rounded one last corner I could see in the distance a welcoming group waving and shouting congrats to our arrival. My fingers were so cold I had to get Kelly to roast me a hot dog over the fire they had going. After a few hot dogs and a couple of cups of hot chocolate any thought of the cold faded away as I joined the excited welcome party to chat about the days adventure.

That night as the last of the people left a new problem occurred. The generators that ran the heaters wouldn’t start due to the cold. Thoughts of trying to survive the cold night were in the back of our minds as we worked to get them started. It was a sigh of relief when the first, then the other fired and purred to life. We would have heat this night! Even with the heaters it was a chilly night but we managed to get a few hours of sleep to eventually greet the morning sipping hot coffee.

The Plan for the final day was to avoid a couple miles along the 308 due to the Semi trucks and begin along Road 503 which is still the Dawson Trail. After a short delay due to a snow plow we were again on our way along the Dawson following our new escort Germaine Vermette on his snowmobile. Germaine escorted us to his home on the banks of the Whitemouth River owned by him and and his wife Paulette. This was the end spot for this leg of the journey.

An uneventful few hours later we could see the diamond sign ahead signalling the end of the road and the beginning of a hill we must maneuver down with no brakes. So, with concern, we approached the hill and then down we went knowing the curve at the bottom lined with rocks and trees could cause injury or a broken sled. It must be maneuvered just the right way. In the end, all went perfect as we sped down the hill, crossed the river and worked up the other side. What a feeling of euphoria we experienced as we were crossing the river to look up at the throngs of people waving and cheering our arrival!

Only a slight hitch to our arrival – As we made a sharp turn at the top of the hill we became hung up beside a tree. Kelly ran up to help and at the same time I jumped out to help push. We found ourselves being dragged along the sled; Kelly on one side and me on the other but that “grand entrance”, as I call it, did nothing to dampen the feeling of accomplishment we all felt on completing the first leg of the Red River Métis Expedition.

See you all there ‘Meegwetch’